As it is known, almost all PLC splitters offered in the market today are symmetrical, which means that in nominal terms the same percentage of input power appears at each of the output ports. Such devices are ideal for multi-dwelling buildings, when over a dozen subscribers are connected to one distribution point in the same building. This a typical star topology. 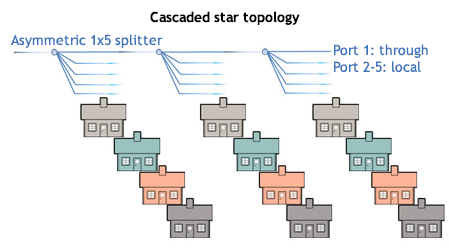 In the conditions of sparse housing such large distribution points are usually non-economical, so a cascading star topology is typically used instead. In this topology, local distribution points are used for supplying only a few subscribers (single-family houses). Until now, operators who built networks in this topology had to cascade asymmetrical 1x2 splitters with symmetrical 1x4, which meant a necessity for making an additional splice, raised the total dimensions of such a solution, and increased the costs.

Innovative asymmetrical 1x5 Fibrain splitters are a new, alternative solution for implementation of such networks. In these splitters, port 1 is a transit port and can transmit up to 75% of the total power, and ports 2-5 are local low-power ports. This is the only such solution available in the Polish market. Version with a monitoring port is also available, in which port 1 is a port of very low power.