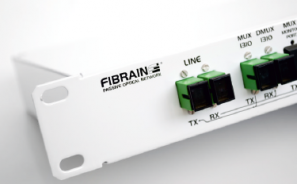 Commonly encountered today fiber-optic access networks most often use the GPON as the basic transmission protocol. In a GPON network, the duplex transmission is realized on one optical fiber, while the central device (OLT) transmits in the 1490 nm channel, and the subscriber devices (ONTs) at 1310 nm. The subscriber devices share a port on the OLT (typically up to 64 subscriber terminals connected to one OLT port) – this is possible thanks to optical splitters that passively divide optical power and using TDM (time division multiplexing, in which each OLT has its own dedicated time slot) with dynamic band allocation. The GPON works well for serving individual subscribers, but business customers often need larger capacities or require separating their signals. In such cases, it is most favorable to offer a dedicated wavelength for each customer. In FTTH GPON, it is possible with using the so-called CDWM overlay.

Version A of the CWDM overlay system:

In version A, a passive central device allows multiplexing and demultiplexing of GPON and CWDM signals. In a standard solution, the central device is built into a 19’’ 1HU patch panel, but adjusting to customer’s requirements is possible. Besides the transmission ports, two 1% power monitoring ports for upstream and downstream directions are also routed, which facilitates service launching and network maintenance.

An analogous device is placed in front of the optical splitter and allows the access to CWDM channels before they propagate through the splitter. Therefore, the link losses seen by the CWDM channels are minimized, which increases the power budget for the CWDM transmission. The outer multiplexing device is adapted for operation in temperatures from 25°C to +70°C.

Main advantages of version A of the CWDM overlay:

Version B of the CWDM overlay system:

In version B, the passive central device that allows multiplexing and demultiplexing GPON and CWDM signals is identical to the one in version A. The outer multiplexers are placed behind the optical splitter (or cascaded splitters). Therefore, the same optical fiber reaching the subscriber can be used to construct GPON or CWDM transmission or both at the same time.

Main advantages of version B of the CWDM overlay: