More and more operators, including those originating from the ISP environment or migrating from wireless solutions, want to have a capability of supplying television service to their subscribers. This is of course due to the fact that an operator who is able to supply the famous Triple Play (the three basic services – internet, television, telephone) to their subscribers can fully satisfy their needs for telecommunication services. The operator can then count on a stronger customer loyalty, which would lead to increasing the average revenue per user (ARPU) and improving the operator’s competiveness.

Due to high signal quality and enormous bitrate, FTTH networks are well prepared for offering television services. They also allow a big freedom in choosing the technology of television broadcasting. The two basic technologies are the so-called CATV (“optical” television) and IPTV. The CATV utilizes the broadcast type of access, and the IPTV is usually multicast or, less often, unicast. Fibrain is the only company out of a few in the market offering both CATV and IPTV solutions.

The CATV technology is simple and well-known in HFC networks and has a lot of advantages, such as:

-No necessity to supply the subscriber with a decoder, which means much smaller costs for the operator

-capability of broadcasting television in DVB-C, DVB-T, PAL or even DVB-S format.

Technically, the CATV utilizes a dedicated optical wavelength. In FTTH networks, it is usually the 1550 nm wavelength or (rarely) 1310 nm. 1310 nm CATV transmission always requires a dedicated fiber if GPON is used simultaneously, thus when using it the signal must be carried to the subscriber in two fibers. This means somewhat higher costs of the passive infrastructure (depending on the project, it is about 10%), since the number of required fibers, splitters, etc. is doubled. At the subscriber end, two subscriber devices are then used – the CATV Fibrain FCMN3 micro-receiver for television and Dasan Networks GPON ONT for Internet/VoIP. 1310 nm transmission is limited because no commercial optical amplifiers for this wavelength are currently available, thus it is not a solution which can be applied in large projects, and the available power budget allows 1x64 split only in short links. Of course, the fiber dedicated for television broadcast can also be used with 1550 nm transmission, and there would be no limits to scaling and power budget. The advantages of using parallel overlay networks for GPON and CATV transmissions in small networks are lower costs of central 1310 nm devices as well as a possibility of separating a TV network for formal purposes.

In the case of necessity to connect the subscriber with one fiber, in which both the GPON and the CATV would be carried, the so-called RF overlay, or WDM transmission of 1310 and 1490 nm (GPON) and 1550 nm (CATV) signals in one fiber, is required. Using RF overlay is possible only with 1550 nm CATV. To achieve this, signals of various wavelengths have to be multiplexed. So-called FTTH/CATV triplexers, or passive optical filters most often built into 19’’, 1U patch panels are used for multiplexing in centrals. 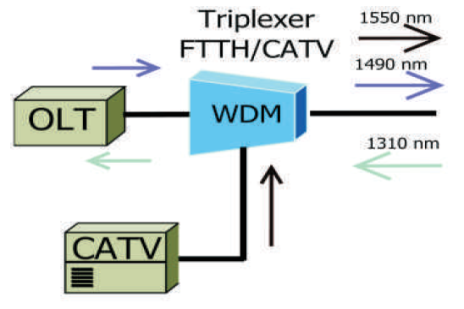 At the subscriber end, CATV and WDM signals have to be demultiplexed. If a GPON terminal with RF (CATV) port is used, a demultiplexer (triplexer) is placed directly inside the terminal. This way, by using one ONT device the operator is able to supply all three basic services (Internet, television, and telephone).

Alternatively, external triplexers in subscriber outlets that separate CATV and GPON signals can be used. This way, the subscribed can receive the same individual devices as in the case of transmission in two fibers if needed:

If an external triplexer is not used, and the subscriber is only interested in internet service, it is enough to supply them with a GPON ONT, since each ONT produced by Dasan Networks includes an optical filter that blocks the 1550 nm wavelength, so the presence of 1550 nm broadcast would not interfere with GPON transmission. If the subscriber is interested only in television, a solution for them would be the Fibrain FCMN3-WD CATV micro-receiver with built-in GPON blocking filter, which is the most cost-effective solution.

The power budget available in FTTH CATV networks that use the 1550 nm CATV transmission is restricted by the safety limit of the 1550 nm light source (optical amplifiers) according to the IEC 60825-1 and IEC 60825-2 standards, and by receiver sensitivity. In practice, it equals to at least 28 dB, which allows 1x64 split, and in most cases also 1x128.

All FTTH passive infrastructure systems manufactured by Fibrain are compatible with the CATV technology, thus such a service can always be added. This of course means that all system components, such as splitters or optical links, comply to the raised requirements of transmitting TV signal capabilities. Our technical support team can help you with choosing both passive solutions and active devices, as well as with power budget calculations.

As for central CATV active devices, Fibrain is the exclusive distributor of the renowned German manufacturer BKtel, who offers devices dedicated for FTTH networks, such as hybrid AOT16200 devices of dimensions as small as 1U and integrating a 1550 nm transmitter with 16-port 16x20dBm optical amplifier. A device of such type allows plugging e.g. 2048 subscribers and offers unachievable until recently cost per subscriber. More information about BKtel products can be found on our page about active devices.